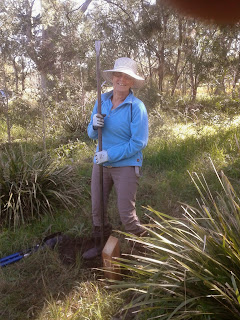 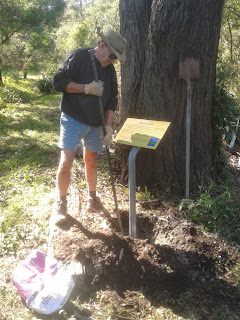 Posted by Earthcare Park Landcare Group at 17:24 No comments: 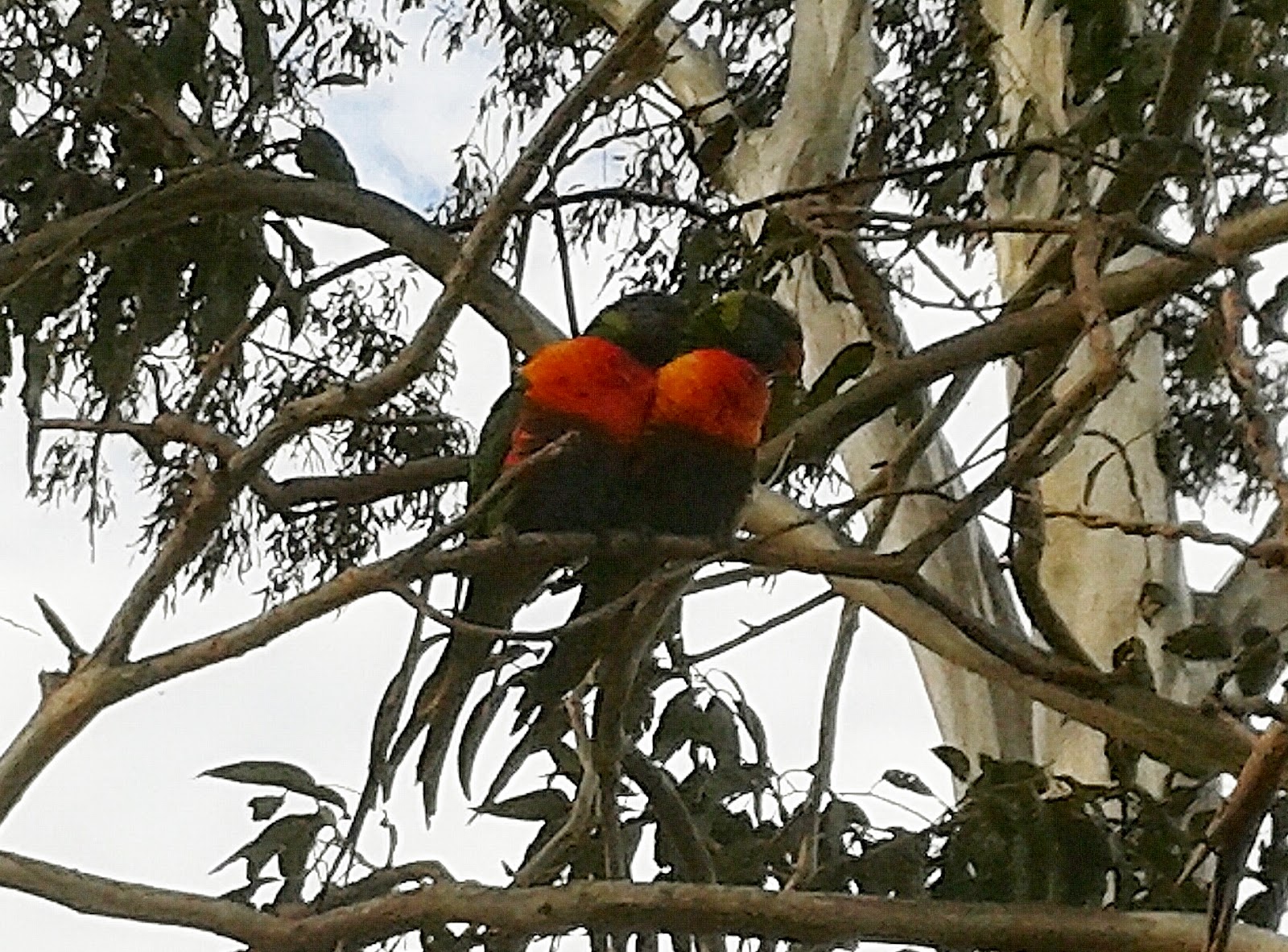 The Rainbow Lorikeet is unmistakeable with it bright plumage as it forages on flowers, nectar and pollen; and occasionally on fruits and seeds. A mostly sedentary yet communal bird they mate for life and have begun breeding at Earthcare Park. Nests are in the hollow of eucalypts in a wide range of treed habitat. Lorikeet eggs are usually found in a clutch of 2, laid on chewed decayed wood and incubated by the female for about 23 days.

Posted by Earthcare Park Landcare Group at 22:23 No comments: This tiny frog is less than 1 cm in length. The Eastern Sedgefrog is one of 4 dwarf tree frogs which cab be active day or night living between the fringes and wetland. Growing up to 30mm in length their small size meandthey are light enough to be supported by grass stems and acquatic plants where they deposit their eggs. Usually green to camoflag themselves there are a number of colour variations along the eastern seaboard including faun and golden yellow. This little guy is sitting on some Lomandra in Earthcare Parks bushfood garden.
Posted by Earthcare Park Landcare Group at 16:11 No comments: Masters of camoflage the Tawny Frogmouth can be found on an exposed limb to mimic a broken branch. Eyes watch attentively through narrow slits as they hunt at night for frogs, spiders, large insects, small mammals and birds. The distinguished coat resembles weathered hardwood and lichen and also gives away the animals sex. There are a number of colour variations around Australia and in this case although both sexes are grey in colour, only females like the one on the right have brown shoulders. Frogmouths are predominately sedentary birds found in woodland and open forest including Earthcare Park.
Posted by Earthcare Park Landcare Group at 14:14 No comments: 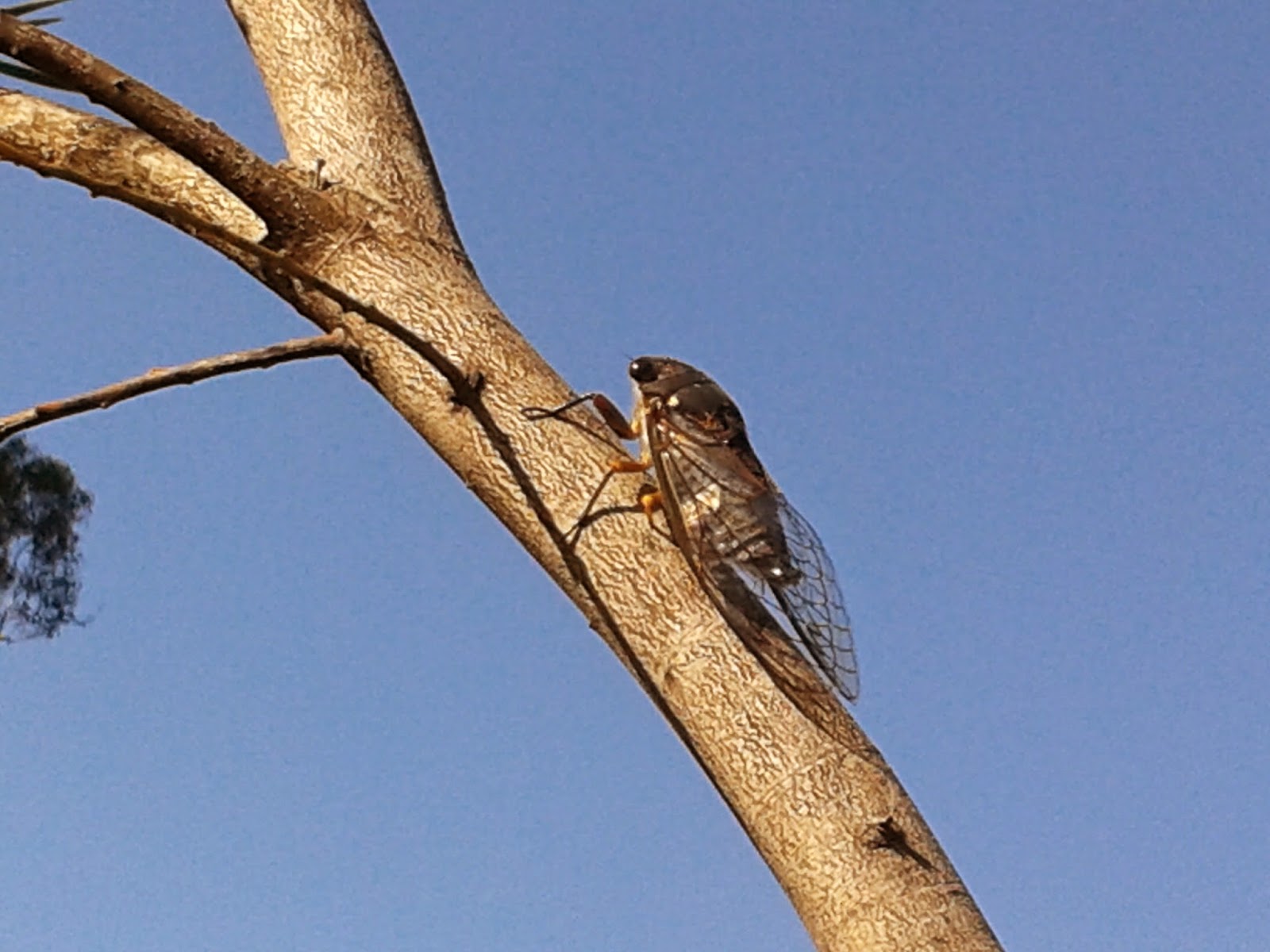 There are more than 200 species of Cicada in Australia. Recognised by their loud noise in excess of 120 dB by some species (which is painful to the human ear) it is done in an attempt to find a mate and thought to actually repels birds. Only male cicadas sing and they have a mechanism to shield their own hearing organ so that it won't be deafened by its own noise. Different species have different songs.


As adults, cicadas have short lives, at best only a few weeks. Though as young insects (nymphs) most of their lives are spent living for 6 to 7 years underground.

Cicadas feed on the sap of a huge range of plants including acacia like this one at Earthcare Park, eucalypts and grasses by using their piercing and sucking mouthparts.

The importance of cicadas is represented in the food chain as they are eaten in large quantities by birds, bats, spiders, tree crickets and wasps.

They are considered harmless to people
Posted by Earthcare Park Landcare Group at 09:15 No comments: Scaly-breasted Lorikeet is a plain green coloured bird but when it takes flight transforms with red underwings and orange bands. Depending on woodland forests for food and shelter it forages on flowering trees including the nectar, seeds, berries and fruit of grevilleas, silky oak, banksias and eucalypt amongst others. This Lorikeet has been banded and has chosen this same nest at Earthcare Park for the past few years.


Posted by Earthcare Park Landcare Group at 20:21 No comments: Very good December rains have transformed Earthcare Park into a green oasis and ensured that our seedlings have had their best chance for survival into the hotter part of the year. Seed foraging birds are abundant and the growth of established trees is quite incredible.
Posted by Earthcare Park Landcare Group at 23:22 No comments:

Next Meeting - 9am Saturday 9th May.

We hold regular meetings on the 2nd Saturday of each month at Earthcare Park, Tenambit NSW.

2014 was a year of incredible change where through the assistance of our friends from Trees in Newcastle we concentrated on planting and establishing sections of native grasses. The project also allowed us to provide a summer and winter grasses identification workshop.

In early spring we hosted an Avarian Awareness Adventure which was open to the public. We were also fortunate to have two Corporate Days where volunteer employees from Telstra and Caterpillar Global donated their time to assist us in our objectives.

Our pride of place the Bushfood Garden has had a make over and we are delighted to report that funding has been made available from Local Land Services to further improve the site as well as host a Frog night. Keep posted for details.

Funds have also been made available through Community Building Partnership 2014 to provide a water pipe to our planting areas which will aid manual handling, save considerable time and increase the survival rate of seedlings.

The Spring show of colour on our plants this year was truly amazing and the bird life even more impressive as is testified by photos you may have seen on this blog and our Facebook pages .


Visitors are encouraged to come along and meet our Earthcare Park Landcare group who are always willing to share their passion for the Park and the incredible transformation that has occurred.

Earthcare Park Landcare Group
Metford Road, Tenambit, NSW, Australia
Earthcare Park is a community based Landcare group. It has been caring for 50 hectares of the Tenambit Common since 1996. Undertaking bush regeneration and nutrient control works, and growing a bushfood garden. We have field days starting at 9am on the second Saturday of each month on site when members and visitors engage in both practical care of the site and educational activities. We also hold fun events throughout the year and welcome the community to come and enjoy the rebirth of this land as a beautiful place to visit and enjoy. We welcome you to enjoy the change of seasons as the large variety of native trees and shrubs come into flower and the varieties of birds and animals increasing in numbers.